DAAHA continues to grow and expand the topics within its collection. Recent additions include planter wires. Each of the samples in DAAHA's collection are from Illinois inventors. 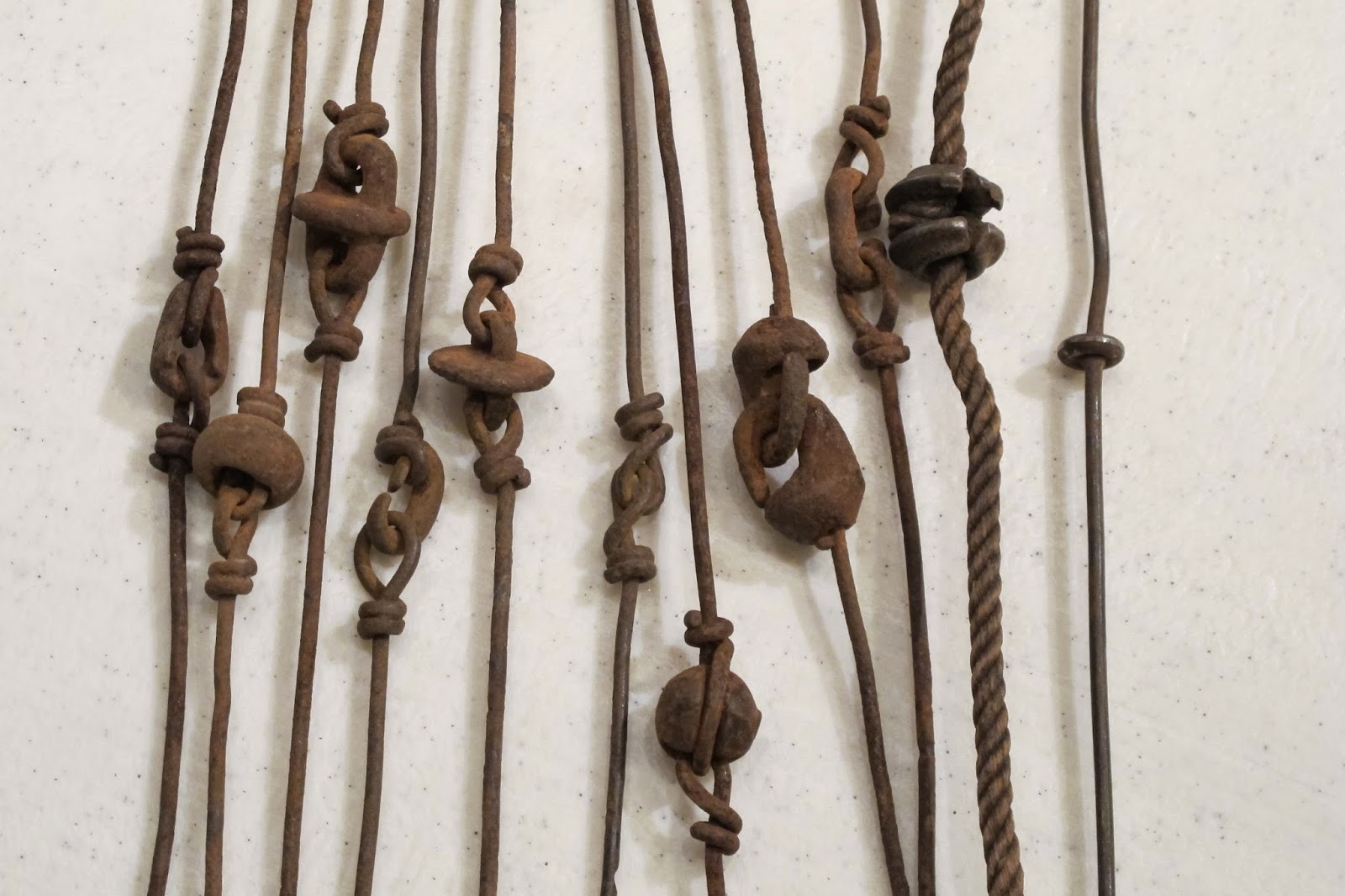 Planter wires, also known as check-line or check-row planter, were stretched across fields to aide in planting straight rows for a variety of crops. Knots on the wire placed at regular intervals tripped seed drop mechanisms on early horse-drawn planters. The first patent for planter wire was issued in 1857. They were in use until the 1950s when tractor pulled planters made the use of the wires obsolete. More than 200 patents were issued for planter wire styles between 1857 and 1939. Most of the manufacturers of check-row planters that used check-lines were located in Iowa, Illinois, Indiana, Kentucky, Wisconsin and Ohio, but the greatest number of inventors were located in Illinois. The Haworths of Decatur, IL became dominant in the planter wire industry and were involved in various patents from 1861 through 1901.

Planter wires differed in the types of line used as well as the particular knots. Lines were made from cord, rope, or chain and could be single or multiple wires. Lines were continuous or chain like.

Early patents were simple knots tied in cord or rope. Later patent improvements added a metal disc on each side of the knot to minimize wear and breaking of the cord at the knot.

Steve and Norm discuss the process of developing a yield monitor used during the
processing of crops. The yield monitor measures pressure on an actuating arm to
determine the amount of clean yield. This data can be correlated with other data to plot a yield map for a field.

The Gun(n)s That Transformed Corn

Our story continues with the development of technology used in corn breeding. Weather conditions and insects continue to challenge farmers as they seek ways to increase corn yield. Researchers are continually looking for ways to grow healthy corn in increased quantities in order to feed a growing world population.

During the 1970s, developments in biotechnology allowed researchers to work directly with genetic material. The gene gun, invented from a collaboration of Cornell University and DuPont between 1983 and 1986, provided a delivery system for DNA into plant cells. The corn plant began to be examined in new ways. 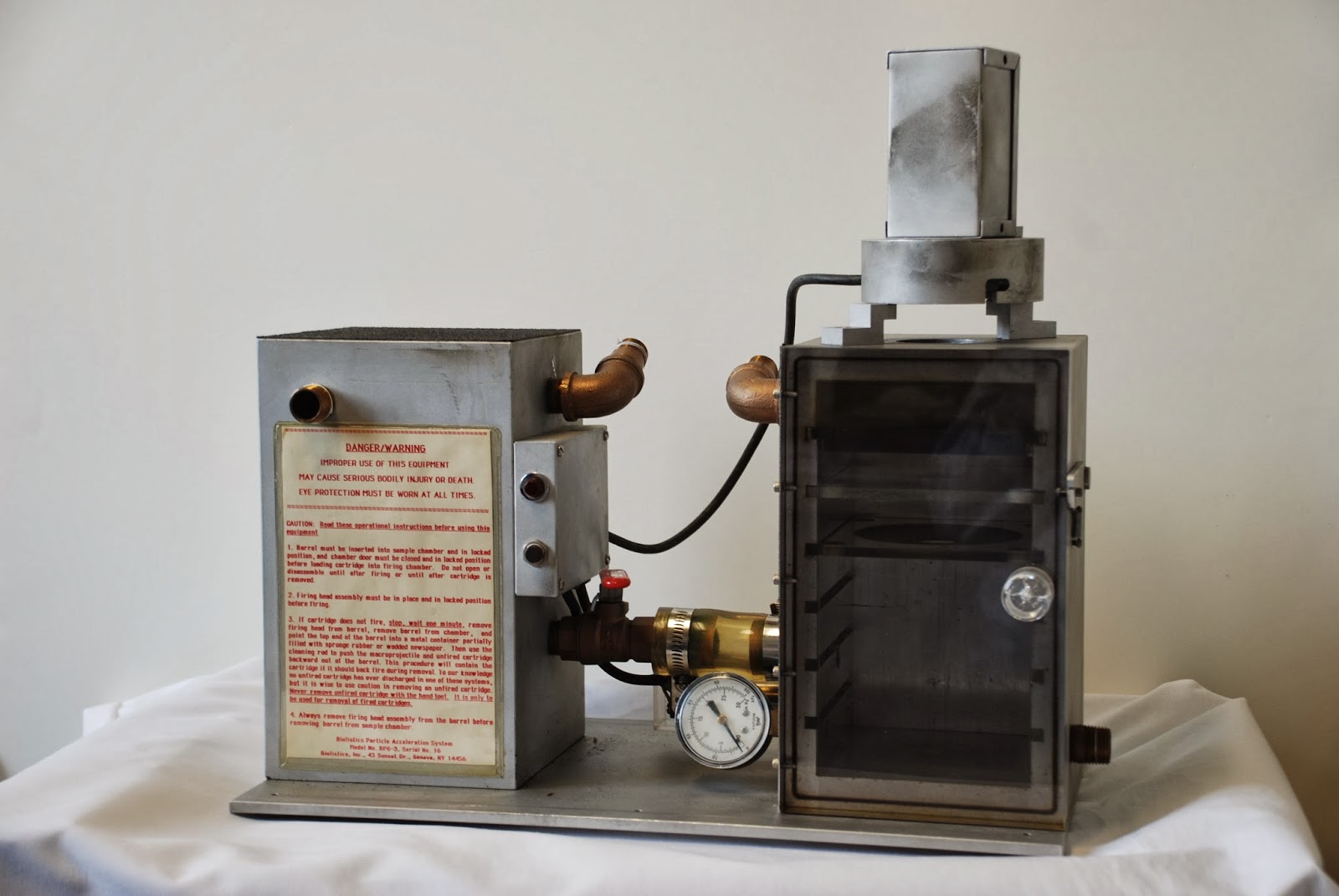 The gene gun uses the method of microprojectile bombardment to add new genetic material to a plant. The process begins by identifying a trait to be added to the corn plant. One trait is the Bt gene to add resistance to the European Corn Borer. The genetic material is isolated from the source and coated onto tungsten particles. 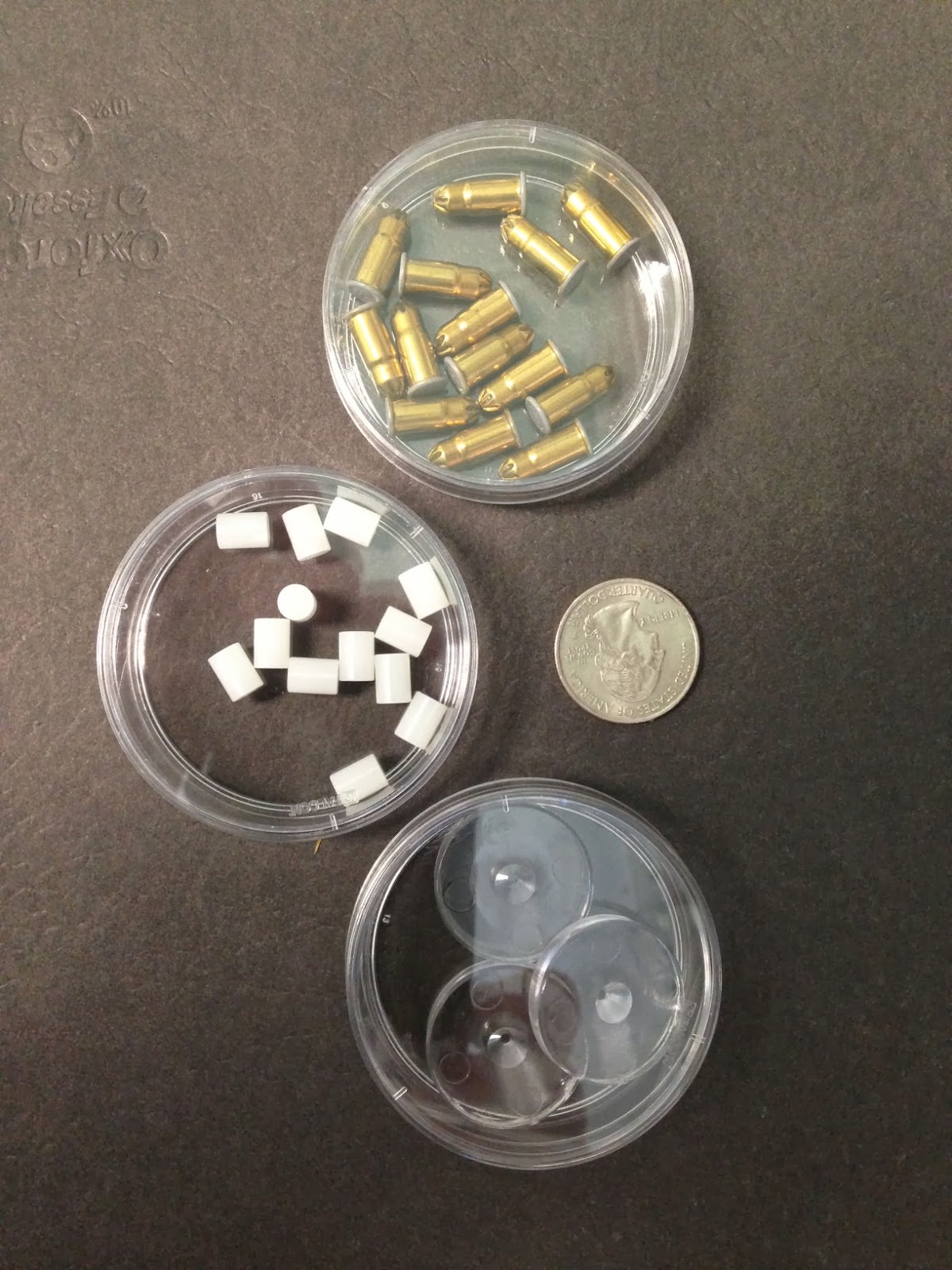 The tungsten particles are placed on one end of a plastic "bullet" (in center dish of picture at left). This "bullet" is then placed in a firing chamber at the top of the machine. When fired, it slams into a stopping plate (in bottom dish in picture) with the tungsten particles going through a hole in the center of the plate and into a petri dish holding receptive corn plant cells.

The impact from the firing blast causes a doughnut like devastation in the petri dish with the cells in the center being obliterated surrounded by a ring of transformed cells  and little change among the cells at the outermost edge of the petri dish.
The corn plant cells are encouraged to grow on a new medium and are eventually moved to a greenhouse. Use of the gene gun resulted in fertile transgenic plants. During the late 1990s, the gene gun showed a higher success rate over other available gene insertion technologies, making the gene gun the method of choice for many researchers.

The third  “Brown Bag” lunch program of the Fall 2013 DeKalb Area Agricultural Heritage Association’s (DAAHA) Agricultural Heritage Programs will be presented this Wednesday, Nov. 13, 2013 at the Ellwood House Visitor Center beginning at noon.  The audience is encouraged to bring a brown bag lunch.

During a career of 41 years in corn breeding and leading breeding teams Walter has hired and trained many breeders and has formed as many winning teams. Some of these teams and breeders have improved the lives of many farmers around the world!

The Gun(n)s That Transformed Corn

The first gun in our story is a person. Charles L. Gunn was hired in 1917 as a stockman and corn breeder for the newly formed DeKalb County Agricultural Association. Charlie spent his summers driving his Model T Ford to Idaho in search of high quality forage seed to improve the stock in Illinois.

Charlie Gunn began working with open-pollinated corn to breed a variety more suitable to the climate in central Illinois. The result was Gunn's Western Plowman. This variety of corn yielded up to 61.25 bushels per acre, considered to be high production in the 1920s.

Charlie Gunn traveled frequently in his work as a corn breeder. He knew and was friends with many of the men researching corn in the fields and laboratories. He was familiar with the research being conducted by University of Illinois chemists on hybrid corn. In 1925, Charles met with Henry Wallace, US Secretary of Agriculture, who talked about the production potential of hybrid corn.

Charlie pulled these many influences together and began his own research on hybridizing corn. Corn breeding requires herculean patience. It took Charlie 10 years before he had results that he could share. His new hybrid was ready in 1933. It out yielded the open pollinated varieties by 35%. He began commercial planting. 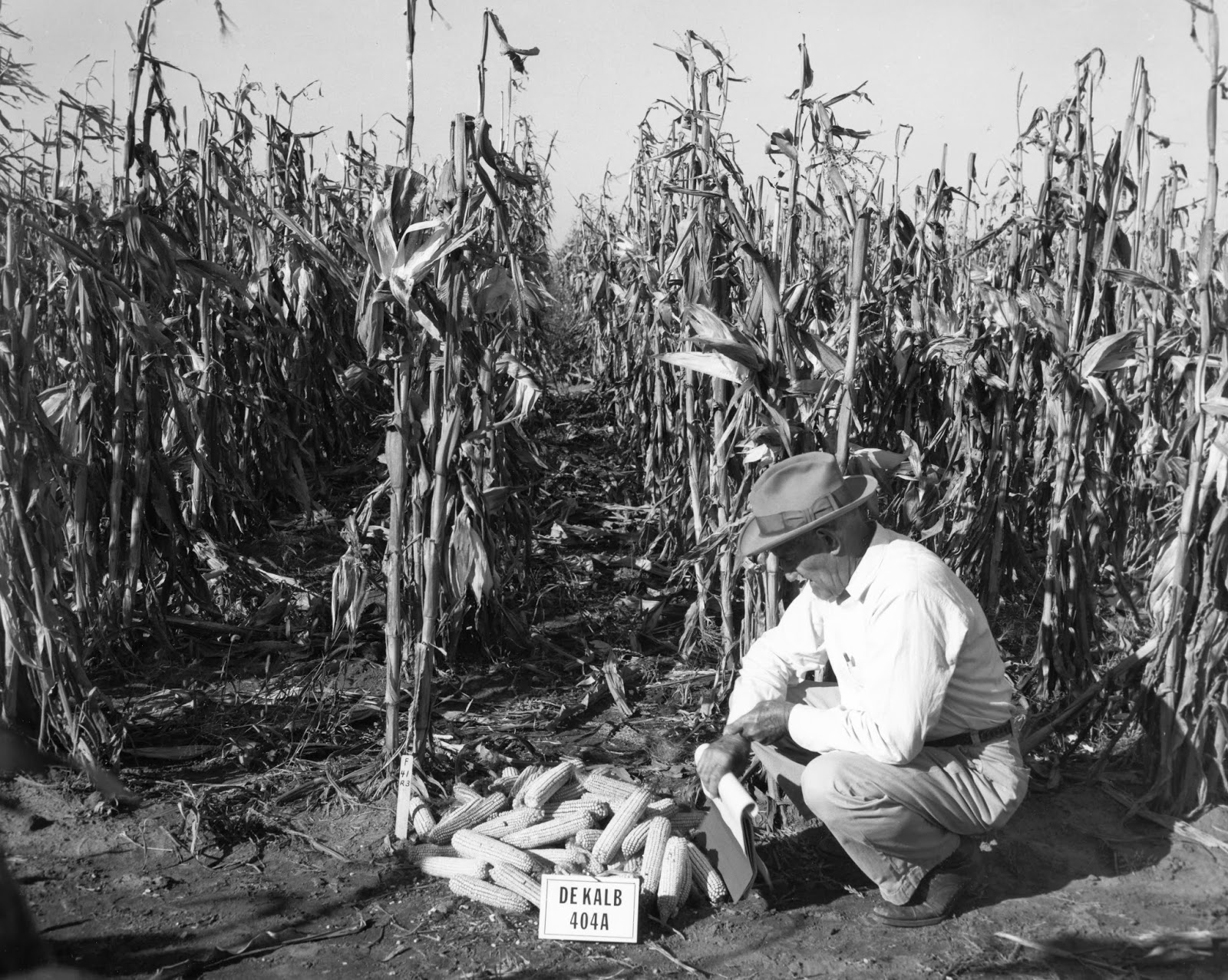 In 1939, Charlie's first commercial hybrid (404A, a double cross hybrid) was grown. DeKalb 404A is the most outstanding hybrid of the first great decade of hybrid corn. It was grown from northern Nebraska across Iowa and southern Minnesota, and east through north-central Ohio and southern Michigan.  It introduces higher yields for shorter growing seasons, moving the U.S. Corn Belt 200 miles north.  It is the first popular and most popular proprietary double-cross hybrid. DeKalb 404A seeds were sold for over 25 years with a total sales of 5.5 million bags.

Charlie devoted over 50 years to corn breeding. His contributions transformed corn and its production.

See the photographic tribute exhibit, The Gunn Behind the Hybrid, at the DeKalb Area Agricultural Heritage Association gallery in the Nehring building downtown DeKalb, IL.

Part II of this story will be posted next week. Stay tuned!


DAAHA has a new YouTube channel at www.youtube.com/daahainc
We currently have 4 videos posted with much more to come. Subscribe to the channel to receive notifications of new videos.

Dedicated volunteers and staff have cataloged the extensive archive and photograph collections of the DeKalb Agricultural Association. These collections are now ready for use by researchers and museum visitors. 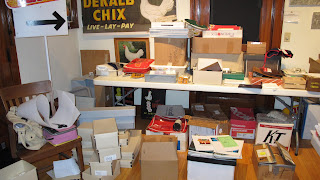 This is just a portion of the DeKalb Ag donation prior to cataloging and organizing it. 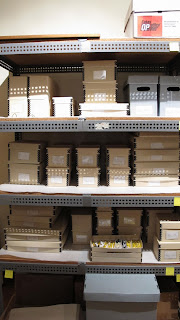 Today the collection is easily accessible and useable for programs, exhibits and research.

The Open House will include tours of the exhibit galleries, behind the scenes storage spaces, the archive and new reference library.